The Development of Cochlear Implants

Back to Overview
The Development of Cochlear Implants

That´s how cochlear implants are developed

Lifelong Hearing always puts people in focus: those that profit from cochlear implants and those that help them do so. That´s why we are today talking from the heart of CI production: Implant Development.

Dr. Martin Zimmerling was born in Innsbruck, where he heads Implant Development at MED-EL today. He encountered cochlear implants during his doctoral studies and was immediately enthusiastic: “Developing implants is an interdisciplinary challenge. The end result is a product with high value for users.”

Over the course of nearly 20 years, the electronics engineer and physics graduate has invented many things, some of which are already being used in systems. “The number of patents is not important,” the inventor says modestly. “What’s important are those ideas that bring actual benefits to the user. It’s often the small ideas that move us forward and ultimately make hearing with CI easier and more enjoyable.”

New Zealander Dr. Ellyce Stehlin is relatively new to the team. Her doctoral dissertation in medical technology addresses safety aspects of implantable devices in magnetic resonance imaging, or MRI. “As MRIs become more common, users of an implant have to be taken into account as well.” That´s possible today because of the better understanding of MRI devices and careful development of new implants. “It wasn’t long ago that people refrained from MRI for patients with any type of implant because they were afraid of the effects of the electromagnetic field.”

In Austria, Zimmerling had been working on safe MRI examinations with MED-EL implants for years. “I quickly realized that the magnet in the CI is in the worst possible position in relation to the magnetic forces in MRIs.” Ten years ago, he already had the idea of arranging the magnetic poles differently, in a spherical shape. But, the first designs were rejected by surgeons with CI experience. He explains that “for them, the spherical design was too large. The extra effort during surgery would have been stressful for young children.”

Later on, the head of development came up with the idea of reducing the shape of the sphere to one dimension. That is a rotating magnet in the shape of a disk, which is freely movable inside the implant. This minimizes the pressure that the magnet exerts on the patient’s head.

“Whenever we change something on an implant, we have to take its all possible effects into consideration.” A changed magnet could have affected signal transmission between the transmitting coil and the magnet, or it could have affected safety and reliability of the systems. “It takes a lot of thinking and testing to check all of this,” says the developer, explaining the long road from an idea to market launch. 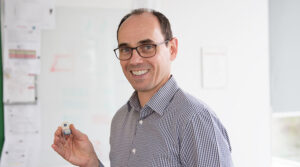 The decision for the best

When Austrian manufacturer MED-EL received approval for its SYNCHRONY for MRIs up to 3.0 Tesla, Ellyce Stehlin was working on her doctoral thesis at the University of Auckland in New Zealand. “That didn’t exist for any other cochlear implant at the time! I realized how active and advanced MED-EL was in this field.” That´s how the young woman decided to join the team in Innsbruck. She even gave up her favorite sport, rowing, to do so! But now, she “conquers the Alps” hiking, running, climbing and skiing.

Research into stronger and more complex MRI scanners is progressing rapidly, but active scientists are always needed. “I like to take on the challenge of keeping up with these innovations so that our users can benefit from this development if it comes to that.” The technician with the friendly smile describes her daily work as “a mix of physical tests in the lab or clinic and computer simulations.”

In the past, her supervisor Zimmerling even made himself available as a test subject: “For example, I held a cochlear implant against my head to feel the interaction of the MRI with different designs of the implants myself.”