More than the sum of its parts – hearing with both ears

What hearing with both ears can bring

Our second ear is more than just a backup for our hearing: it significantly facilitates our everyday life. This is why experts call for hearing restoration in both ears.

In 1984, American scientists Fred H. Bess and Anne Marie Tharpe published data on the effects of unilateral hearing loss in children, which were supported by many other studies in the following years: Children with unilateral hearing loss are more prone to difficulties in speech and language development, education and socio-emotional developments compared to their peers with normal hearing in both ears. They also showed significantly poorer speech understanding and sound localisation.

This also affects academic performance: among these children, the percentage of pupils who needed to repeat at least one year was higher than average and up to 60% of them required extra tuition for several years. Children with unilateral hearing loss who did not get any extra support faced more severe academic problems than those with bilateral profound hearing loss.

“I have always loved music”, Ewald Thurner, Area Manager at MED-EL Vienna admits. He remembers his teenage years: “My father had a huge, old tape recorder. When you used two microphones, you could record in stereo.” A special technical effect impressed him deeply: „The recorder had a mono button: When I closed my eyes and listened to the stereo recording, I almost saw the orchestra playing in front of me. When I pressed the Mono button, the world around me was suddenly limited to a narrow line right through my head.” He is shaking his head as if to shake off these memories. “This effect deeply impressed me, I tried it over and over again.”

„If the tape recorder had had a ‘unilateral’ button, even more sound information would have been missing than with the mono setting”, Thurner is convinced. To fully understand unilateral hearing, you could pull out one loudspeaker of a stereo system and not use the free output.

Ease of hearing with both ears (binaural hearing)

„The combination of binaural summation, binaural masking and the head shadow effect make hearing and understanding effortless. This is what people with bilateral hearing enjoy“, writes Judith E.C. Lieu in her scientific paper on the advantages of bilateral hearing. Binaural summation is easy to understand and especially noticeable with soft sounds: When you hear with two ears, you hear everything twice and, therefore, louder. But Aristotle’s quote “The whole is more than the sum of its parts” – also holds true for bilateral, i.e. binaural hearing. To explain the additional factors you need to look at the physics behind.

Researchers from the renowned Acoustics Research Institute in Vienna, which is part of the Austrian Academy of Sciences, are studying the physical and psychoacoustic relationships of hearing with and without hearing devices. Physics considers the head an obstacle for sound waves which creates a shadow at certain frequencies. For some pitches this leads to level differences between both ears (fig. 1). Furthermore, sound can only reach both ears at the same moment, if the sound source is placed exactly centrally, behind or above the listener. Any other placement will lead to a minimal time delay between the two ears (fig. 2). Experts call this the interaural time difference. 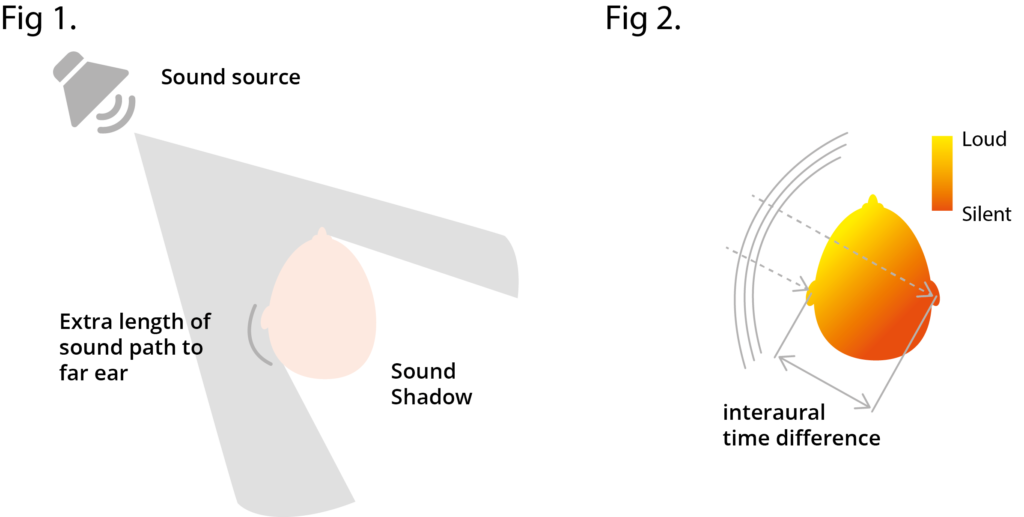 The sound-processing parts of our hearing use these tiny differences to determine the position of a sound source. If there is more than one sound source, this phenomenon helps suppress interfering noise.

Our brain wants to learn – to hear

Single-sided deafness has far-reaching effects on the brain. Professor Andrej Kral is a leading audiological neuroscientist at the Hannover Medical School, Germany. In an interview for a German magazine, he sketched out the brain’s plasticity: “Hearing loss that leads to an imbalance either between both ears or between frequencies, is a particularly effective trigger for plasticity processes.”

The auditory part of the brain will be reorganised and unused parts of our central hearing will be used for other auditory functions. This holds true for our whole life, but the effects are particularly strong in childhood: “Most synapses in the auditory cortex start developing after birth and rely on auditory input. If this is missing, there will be a delay in the synaptic development, and many synapses will recede later.”

“In a 2013 study we proved that distinct differences between the left and the right ear lead to a reorganisation of the brain’s plasticity and, as a consequence, to a “stronger” and a “weaker” ear”, Kral explains the long-term effects of unilateral hearing. Like other hearing abilities, binaural hearing mainly develops in childhood years.

For hearing impaired children, experts and professional associations in many countries recommend hearing devices in both ears. Many national health authorities provide binaural hearing aids or implants to working adults, as hearing with two ears will improve their speech understanding, especially in background noise.

Ewald Thurner, an engineer by profession, has been in charge of the technical support for cochlear implant users since 1993. The first bilateral cochlear implantation, he recalls, was in 1996. „With a cochlear implant in one ear, users who did not hear anything before reached quite a good speech understanding. However, it took them a lot of listening effort to follow everyday conversations. These listening efforts were drastically reduced with implants in both ears. Listening simply became easier.“

The advantages of binaural hearing and bilateral implantation