Back to Overview
SAMBA 2: New audio processor for Vibrant Soundbridge and Bonebridge

SAMBA 2 is the new audio processor for Vibrant Soundbridge and Bonebridge users. It learns independently what settings you prefer in various hearing situations and sets itself automatically to them – so comfortably, that you could completely forget that you have a hearing system!

If the SAMBA, the audio processor of the Vibrant Soundbridge and the Bonebridge, could set itself automatically to various hearing situations, then this function has been further extended with the SAMBA 2. It offers a new pre-setting for the hearing situation “car journey”. The fine setting of the processor, the so-called Equalizer, can be adjusted according to the situation. The processor recognises manual settings that the user carries out in everyday life and uses these automatically when similar hearing situations occur again. Further options are implemented to suppress undesired noise interference in the SAMBA 2.

“The design of the SAMBA was widely acclaimed”, says the SAMBA 2 product manager, Marina Brunnhofer. For that reason the proven design was fundamentally kept in the SAMBA 2, but with innovations in the details. “We know that some users of hearing aids find battery changes tricky“, adds Alexander Hofer, head of product management – he lists, “we have developed the battery charge, the design covers and the fixing clips to make them as simple and intuitive to use as possible.“

Along with that, SAMBA 2 also became splash-proof and dust-resistant, like all current MED-EL CI audio processors. With a WaterWear-cover, SAMBA 2-users can even use their audio processor when swimming and snorkelling! The current offer is completed with the new SAMBA 2 GO for audio streaming and the smartphone app SAMBA 2 Remote as an enhancement to the current remote operation. 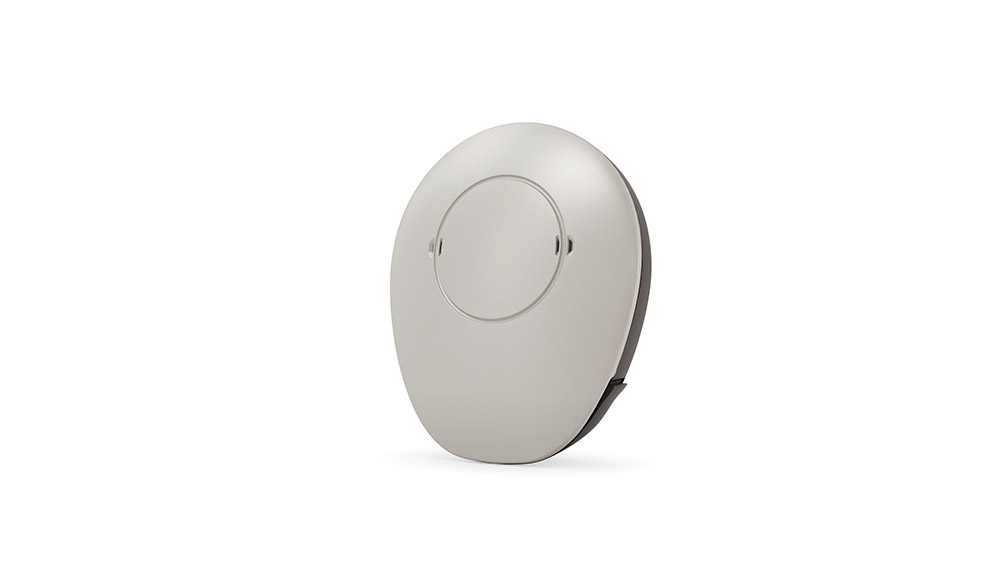 Why audio processing is important

Along with the cochlear implant, CI for short, for deaf and severely hearing impaired people, MED-EL has also been offering hearing implants which use the partially functioning inner ear since the first model of the Vibrant Soundbridge in 2003. These provide a much more natural sound impression, but have to take into account the restrictions of a damaged inner ear.

It is not just various frequencies that are affect differently by hearing loss does, quiet and louder sounds are also affected in different ways. While loud sounds are mostly heard with unchanged loudness, quiet sounds have to be significantly amplified to be perceptible. This makes the difference in volume between quiet and loud sounds strongly restricted: the acoustic sensation loses contrast. As with low-contrast pictures, details in a low-contrast acoustic picture can only be perceived with difficulty or not at all. That is why modern hearing aids and audio processors offer “acoustic contrast amplifiers”, which emphasise speech above background noises and make it more comprehensible.

The new SAMBA 2 audio processor subscribes to this with an enhanced Speech Classifier, with responsive, enhanced noise interference suppression and with new streaming accessories.

“We designed the SAMBA 2 so that users can put them on in the morning and then forget about them.” says Peter Lampacher, director of the development department at MED-EL Vibrant. “Our users do not need to worry about changing programmes. The intelligent sound adaption of the SAMBA 2 adjusts the setting of the audio processor automatically to the acoustic environment: it reduces background noises, like the rattling of plates in a restaurant, and the Speech Tracking function focusses on the person speaking. That leads to effortless hearing in every situation.”

Another new feature is a defined hearing situation of “car journey”: unlike in other situations, the person speaking is not usually facing the listener in the car but sitting next to or behind him or her. The function Speech Tracking does exactly that, focussing sound pick-up automatically on the speaker.

Hear in high contrast as quickly as possible

Interference noise can be really annoying! Even the microphone’s internal noise or various background noises are not only unpleasant, but they also make understanding speech more difficult.

The SAMBA 2 uses the same efficient suppression for wind noise and feedback as its predecessor. The rattling of plates, the squeal of a circular saw or the bang of a bursting balloon – sudden loud noises are also suppressed. Where interference sounds are suppressed slowly, it can happen that the troublesome background noise rises again between individual words. To prevent that, the SAMBA 2 works especially quickly. The newly implemented Directional Speech Enhancement function can, independently of the hearing program activated, focus on the speaker who has turned to the user where there are several speakers. This makes understanding in pubs or large groups even easier.

There is now the Acclimatisation program to reduce the number of appointments for adjustment in the first stage of getting used to hearing to as few as possible: the volume is increased according to the wearing time. If it is then too slow or too fast for the user, the user can then manually adjust the volume to speed up or slow down the Acclimatisation.

SAMBA 2 GO is more than a hands-free speaking system

What is heard directly in the ear can be heard more clearly and comprehensibly. People with normal hearing use this effect with headphones, users of hearing aids with special accessories.

The SAMBA 2 GO is such an accessory. It offers connection facility for audio devices with standard Bluetooth or via normal audio line-in and to FM systems. With two built-in microphones, it even acts as a fully functioning hands-free system for a smartphone and can also be used as a remote-control device for the SAMBA 2.

The transmission volume of the SAMBA 2 GO increases automatically in loud environments so that no sound is lost in concerts or in loud shopping malls. A specially adjusted hearing program on the SAMBA 2 GO also activates automatically. The user can define individually whether and how loudly the environment is also heard while listening to music or using the telephone and how the sound quality for high sounds should be.