Back to Overview
Beethoven´s Life with Hearing Impairment

In his will, the composer Ludwig van Beethoven vividly describes the typical social isolation of a person with hearing impairment and hearing loss as a disease. However, with the means that modern medicine today offers, he could have probably been cured.

Beethoven was already hard of hearing at the age of 28. In the end, he was deaf – a thorny path for the highly gifted musician. Listening to the dark Piano Sonata in D Major (op. 10) “largo e mesto”, that he composed in 1798 at the very beginning of his hearing loss, one could believe to find something of the notion of this difficult life path.

“…my hearing has been getting weaker and weaker (hearing loss) for three years… only my ears buzz and roar away day and night (tinnitus)… I spend my life in misery. For two years, I have been avoiding all social activities, because it is not possible for me to tell people that I am deaf. If I had any other profession, it would be easier, but in my case it is a terrible condition… I can’t hear the high notes of instruments and singing voices (high frequency hearing loss) if I’m a little far away, not even the wind instruments in the orchestra. Sometimes, I can hear the speaker who is speaking softly, but not the words (loss in speech intelligibility), and yet, as soon as someone shouts, it is obnoxious to me (hyperacusis).”

It was Kant who remarked that blindness separates from things, while deafness separates from people. Beethoven describes the social isolation of the hearing impaired and hearing loss as a literaly invisible disease: it cannot be seen and the person affected makes himself/herself invisible. Beethoven withdraws from the world of the hearing and automatically loses an important part of his existence. The sick Beethoven had suicidal thoughts. It was his art that saved him.

How an ear works

The ear is our most sensitive and fastest sensory organ. The smallest perceptible sound pressure in the inner ear leads to deflections no larger than the diameter of a hydrogen atom. More than 1000 consecutively occurring events per second can be detected.

In the human inner ear, there is one row of inner hair cells and three rows of outer hair cells. The latter have the task of amplifying soft signals, so that they fall within the audible range (cochlear amplifier).

A cause of sensorineural hearing loss

Disturbances or loss of function of the outer hair cells are a common cause of sensorineural hearing loss. Quiet sounds are no longer actively amplified and, without outer hair cells, the inner hair cells hear only from 50 to 70 dB SPL. Beyond that, frequency selectivity is lost. This may explain a loss of speech discrimination in the speech audiogram. Furthermore, recruitment, or loss of dynamic range between softest and loudest signal, occurs. In addition, binaural auditory performances, such as lateral spatial hearing and signal detection are expected to be significantly impaired.

Based on his own descriptions, we can assume that Beethoven´s hearing loss began when he successively lost outer auditory sensory cells. His symptoms suggest that, like many people with inner ear hearing loss, he no longer had sharp frequency mapping in the cochlea. As a result, he suffered from the limitation of speech intelligibility. He described it as follows “I can … hear … but I can’t understand the words.”

The treatment for Beethoven´s hearing

The treatment of Beethoven’s ear disease began in 1800. He tried almond oil ear drops and horseradish cotton, certain types of tea, but also so-called vesicants, which led to blisters on the skin. He hoped that with the disappearance of the blisters, the disease would also go away. This was a typical treatment for that time, although it may seem quite strange to us today. Finally, he was prescribed lukewarm Danube baths, which allegedly have slightly helped him with his ringing in the ears.

However, there was no mention of a cure, so Beethoven’s doctor-hopping was no wonder. Unfortunately, the best doctors of his time could not help him. And yet, in the years leading up to 1812, Beethoven composed eight of his nine symphonies. The inventor of the metronome, Johann Melzel, gave Beethoven a little help in 1814 – an ear trumpet. Another aid was a wooden stick attached to his Erard grand piano, which Beethoven took between his teeth and this way sense vibrations.

But even these small improvements were thwarted: from 1814, Beethoven’s hearing loss was rapidly worsening. The evidence shows that in 1814 his last public appearance as a pianist took place. After that, he played only among friends or for himself. In 1816, according to Simrock, personal matters could only be communicated in writing and from 1818 all conversations with him were exclusively written. Around 400 so-called conversation notebooks have been preserved. If one compares Beethoven’s portraits from the years 1812, 1815 and 1818, one gets the impression that his face had become almost 20 years older during these six years. It reflects Beethoven’s terrible inner experience. 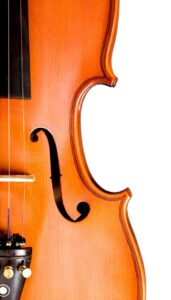 On May 7, 1824, Beethoven was formally the conductor of a concert, but in fact the orchestra followed Michael Umlauf, the “assisting” conductor. There was frenetic applause already after the second piece of music. Beethoven, however, did not turn to the applauding audience. He was taken by the shoulders and gently turned around so that he could recieve the applause. Obviously, Beethoven was deaf. According to the information that we have today, we can assume that in 1824 not only Beethoven’s outer auditory sensory cells but also his inner auditory sensory cells had given up their function.

Even without hearing loss, Beethoven was a sick man. During the last weeks of Beethoven’s life, his hospital room was very busy. He experienced social attention from which he had been hiding for more than 15 years. Not only did at least two doctors come daily for rounds, but friends and acquaintances also turned up regularly. On March 24, 1827, a thunderstorm raged over Vienna in the afternoon – and Beethoven died.

The autopsy was performed by Dr. Johann Wagner, assistant at the Pathological Museum together with Dr. Karl von Rokitansky. From today´s perspective, it is most likely that Beethoven suffered from a so-called chronic sensorineural hearing loss. In this case, there would have been a loss of function and destruction of the outer hair cells and with progressive deafness also of the inner hair cells. After the complete loss of the inner hair cells, the auditory nerve may also partially lose its function. The autopsy report states that the auditory nerve was clearly too thin and shrunken. Wagner and Rokitansky struggled to describe the hearing condition of the famous man with all the means available at that time. The hair cells had not yet been discovered and there was no microscope. Only the naked eye observation was available.

Modern medicine would not have cured Beethoven – but it could have helped him. He probably would have been able to listen to his music for many years with a modern hearing aid. Later, he might have had a hearing implant (from Austria) surgically implanted in his middle ear. It stimulates the inner auditory sensory cells through micro-vibrations, when the outer ones lose their function After the destruction of the inner hair cells, Beethoven could have had a cochlear implant (from Austria) placed in the cochlea. A cochlear implant works when the entire inner ear, including the inner auditory sensory cells no longer functions, but the auditory nerve is still in good condition.

Even if the auditory nerves are eventually affected as well, the solution in the form of a brainstem implant is available – and also “made in Austria”. The implant then stimulates the brain directly and the auditory nerve is not needed. Finally, Beethoven’s music may not sound as elegant with a cochlear or brainstem implant, but he could have probably had a chance to hear it.