The Future of Cochlear Implants

Back to Overview
The Future of Cochlear Implants

What are the future innovations in CIs?

Manufacturers of cochlear implants are announcing many innovations for the next few years. On the other hand, users’ requests seem almost modest: simple audio accessories and more focus on music.

G3ict, a United Nations initiative to promote the rights of people with disabilities in the digital age, invited CI users, suppliers and professionals to an exchange on the future of cochlear implantation on the 60th International Cochlear Implant Day on February 25. G3ict's Rachel Paul said that it is very important to focus on users and their needs, especially with "what is, in fact, the most successful development of technological solutions".

Patrick D'Haese, a head of the sector for public affairs at MED-EL, only briefly mentioned technical innovations related to the processor and implant. He focused on the expanding range of applications for cochlear implants, as well as developments in audiology and surgery. Thus, future implantations under local anesthesia and with shorter hospital stays could become possible, as well as the implantations at the day clinic. Scientists hope that electrodes with pharmaceutical applications and robotic support during the surgery and insertion of the electrode will be able to prevent inflammation after the operation even better and thus preserve residual hearing even more safely!

The Corona crisis has triggered a surge of innovation in telemedicine and telehealth in the CI field.  Programming the audio processor, a technical check-up and even online rehabilitation seem no longer impossible. D'Haese speculates that this is a promising option for CI users in rural areas. 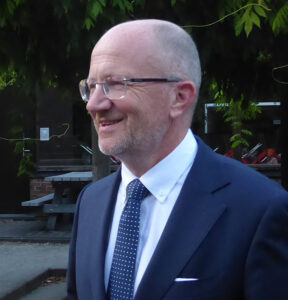 "Music should be part of CI rehab!"

"I was more afraid of losing music than losing speech," says Robert Mandara, vice president of EURO-CIU, the European umbrella organization of CI self-help groups, about the time before implantation. For the hobby pianist, music is also an important way of reducing his tinnitus. Too short electrodes of some CIs impair pitch perception, unfavorable volume compression limited the dynamics of the music, just as "a frosted glass pane would also impair the view of Mona Lisa."

"When I played the piano, it sounded right. When I recorded it and listened to it later, I couldn´t recognize the piece." For Mandara, this is an indication of how important expectation is while listening to music. He says that with practice, his musical skills with the CI are developing, but he is still not satisfied. That´s why he would like to see freely available music training. In addition to the differentiation of pitches, this would also involve the perception of the emotions conveyed by music. "Music should be part of rehabilitation for all CI users. It would help to better recognize not only speech but also other sounds."

"Cochlear implantation is not a cure for deaf people," says CI user Dennis Selznick, explaining why he relies on additional devices in many situations. But the variety of these tools is confusing for many users, as they vary from manufacturer to manufacturer and sometimes have very specialized uses.

That's also the case with Beth Wagmeister and her wife, who are both implanted but with different CI systems. When they want to watch TV with their normal-hearing children, they say, it's almost impossible because of the different auditory access: "But we want the world to be the same for CI users and for hearing people."

"It's about changing lives!"

Sue Archbold, who led the Nottingham CI program for 15 years, speaks of her neighbor Rosemary, who received a cochlear implant when she was over 70: "Rosemary has a lot on her plate: she has arthritis, macular degeneration is destroying her sight, and she has a husband with dementia. Without implants, neither she nor her husband could live alone without help. And when she needs help with her CIs, she knocks on my door."

Rosemary needs help often: although the tiny processors are an asset to other users, they become a problem for the old lady's arthritic fingers and blinding eyes. Many other options confuse Rosemary: "How many remote controls do I need?" The industry is doing its part, Archbold says: the "tangle of wires" of earlier systems has been eliminated and handling is simplified. But she sees further need for action.

But Archbold also called for appropriate rehabilitation services for CI users, as well as lifelong care and support for their systems - otherwise CI users would sometimes quickly discard their devices. As a committed CI advocate, she did not miss this opportunity to point out the relevant undersupply of cochlear implants in many countries: "It's not about numbers, it's about changing lives!" She encouraged affected individuals and families to join forces to approach governments and social service providers.

Despite the economic challenges of the Corona virus, the Austrian company MED-EL has introduced many innovations in hearing implants in 2020.